I just keep finding more and more videos stashed away! This one would have been taken just over a year ago, when Wayne and I were doing our week of lesson planning before the school term started at Tapae. Kru Dum (“Teacher Black,” because his skin is so ‘black’– his words, not mine) was one of the friendliest (of an almost entirely friendly) group of teachers we had the pleasure of working with at the school and he endeared himself to us from Day One. Though his command of English wasn’t the greatest, he loved to practice, and conversation often steered to his specific area of expertise– music.

On this particular day he’d asked if Wayne or I could play any instruments; I informed him I could play both guitar and violin. His ears seemed to perk up when I mentioned the violin, and he indicated he’d like to hear me play. Then he made a bowing motion with his arm, said something in Thai we didn’t understand, and darted off with the indication that he’d be returning soon. I was under the– thankfully wrong– impression he was fetching a violin for me to play, and was dreading having to turn down the request on account of having not practiced in months.

Imagine my surprise when he turned up with a handsaw and a bow, and proceeded to churn out an eerie but unmistakable rendition of “My Heart Will Go On.” The sound was reminiscent to me of a theremin (one of the oldest electronic instruments that, as far as I can tell, runs more off magic than electricity, and is just one of those odd things that makes me gleeful to just think about), and the experience was altogether novel. So here’s a little video of Wayne getting a lesson on the handsaw, and then Kru Dum playing “Happy Birthday” to “Teacher Angela and Teacher Whale” (Thais have a hard time with ‘n’ and ‘l’s at the ends of words. Also yes, this was filmed in November and Wayne’s and my birthdays are in March and September, respectively).

As it turns out, Kru Dum’s skills on the saw have taken him to big places. He made it to the second round of Thailand’s Got Talent! 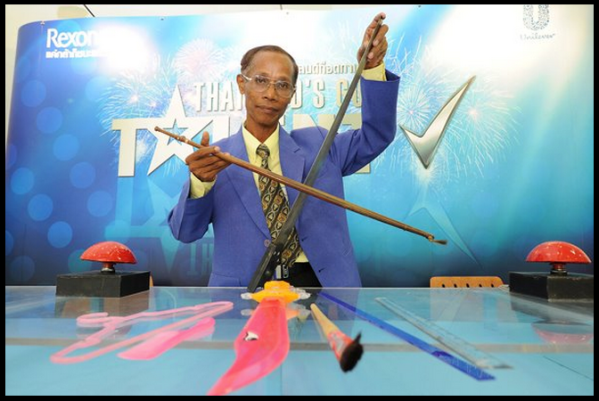 And as so often happens, after discovering some off-beat information, one begins seeing it everywhere. I discovered the band Frontier Ruckus on Grooveshark, and when perusing their videos was greeted first with this:

Then Wayne and I were watching the movie Another Earth, which features this scene:

Another Earth Saw Instrument Scene from Sevan on Vimeo.

I even read somewhere that the high, wailing sounds heard in that Neutral Milk Hotel masterpiece, “In The Aeroplane Over The Sea” are produced by a saw. (As it happens, I’d previously been under the impression they were made by a theremin. Anyone have any insight on this?)

Um… and sorry, I can’t help myself… I really just love theremins and have to include a few more videos.

Clara Rockmore was a textbook virtuoso on the theremin. She was, as the video information so articulately conveys, “the first performer to bring complete musical artistry to the theremin.”

Any Led Zeppelin fans out there? Are these strange quavering sounds bringing back any fond memories of “Whole Lotta Love”? Turns out guitar isn’t the only thing Jimmy Page knew how to, how you say, shred. (This video isn’t actually a great display of theremin talent, but it’s fun to watch the guys goof around. Seen here with the Edge and Jack White; a deleted scene from It Might Get Loud.)

And if that wasn’t enough to win you over on the coolness of the theremin, it also made  guest appearances in Weeds and The Big Bang Theory.

(Although I suppose the fact that Sheldon owns one might actually subtract a few cool points.)